Autism affects thousands of children and families, yet many parents and teachers are unsure about the signs of autism. While many children with autism are identified in their preschool years, for others the diagnosis comes later. Kristelle Hudry, from La Trobe University explains how to spot an Autism Spectrum Disorder in a school-aged child. 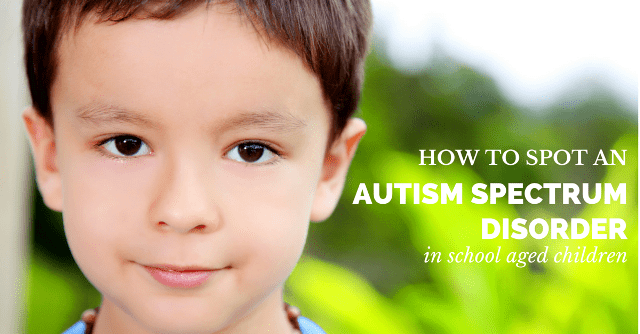 Autism Spectrum Disorder (ASD; which now includes former diagnostic labels such as Autistic Disorder and Asperger syndrome) is a life-long neuro-developmental disorder. It first shows itself early in life, emerging across toddlerhood and into the preschool years.

It’s what’s on the outside that counts

There is no genetic or blood test for ASD; diagnosis is based on behaviour.

Specifically, we look for three things when deciding whether someone has an Autism Spectrum Disorder.

Other features can also accompany an Autism Spectrum Disorder, such as anxiety, feeding and sleeping issues, hyperactivity and medical conditions such as epilepsy. Together, these can have a substantial impact on school performance.

These days, ASD is often diagnosed in pre-school. ASD affects around 1% of Australian preschoolers and most young children receive their ASD diagnosis around their fourth birthday. However, ASD can be diagnosed reliably much earlier – often by a child’s second birthday – if symptoms are clear and professionals are knowledgeable.

By school age, however, some evidence suggests ASD affects 1.5% or more of children. This suggests many children with ASD are missed during the preschool years. Later diagnosis may occur because a child’s symptoms are subtle, or because of limited awareness or available resources in the area.

How to spot an Autism Spectrum Disorder

Teachers are well placed to spot possible ASD in school-age children. They have experience with the range of skills children present at a given age and can watch children interacting together. Many school-age children are referred for specialist assessment when teachers become concerned.

The process for making an ASD diagnosis in childhood is a bit like that for identifying a learning disability. We look for whether a child’s social skills fall short of their potential. Unfortunately, though, there is no easy test to tell us if a child shows “age-appropriate social behaviour”, in the way that we do have tests for age-appropriate language skills such as reading or writing.

A reading-based learning disability is diagnosed when a child’s reading achievement is below what we expect for their overall intelligence and no other clear reason explains their poor reading (such as lack of exposure to text). As ASD is a disorder of social skills, we evaluate whether these are lower than expected for the child’s age and level of intelligence, and we rule out other possibilities.

ASD is diagnosed when a child’s social skills are below those of same-age peers and this cannot just be explained by an intellectual or language impairment that may also be present. Similarly, the child’s restricted/repetitive behaviours are more than expected for their age and intellectual level.

Many human abilities – intelligence, physical fitness, a musical ear – fall on a “bell” or normal curve. We are all different, but most of us cluster around a mid-point in our level of skill, with only few of us particularly impaired or excellent.

Sociability is no different. Some of us are more or less outgoing than others. We set a “cut-off” point for people who have very limited social skills (for their age etc) and this may seem like an arbitrary method for diagnosing ASD. But the cut-off point is an important one; where social difficulties present a functional problem for the person’s daily life. ASD is not just about being bit shy or reserved.

What’s in a name?

Many children without diagnosed ASD benefit from support to develop their social skills. And for children whose social difficulties are strong enough to be considered “symptoms”, a formal diagnosis can allow access to specialist support.

Need help for your ASD child?

Kids First has been selected by the Australian Government to provide Early Intervention and targeted support to children with autism. Our therapists and teachers are highly experienced in the area of disability support and some members of the Kids First team are the parents of special needs kids.

We ‘get it’…and we are committed to helping you, your child and your family.

Find out more about Kid First’s support services for northern beaches children diagnosed with autism here or contact us today on (02) 9938 5419 to discuss your child’s needs.
* This article was originally published on The Conversation. Read the original article.