Playground bullies have been placed on notice – kids as young as five are learning to stand up for themselves and their friends. Children’s therapists in Sydney’s northern beaches explain how to deal with bullying. 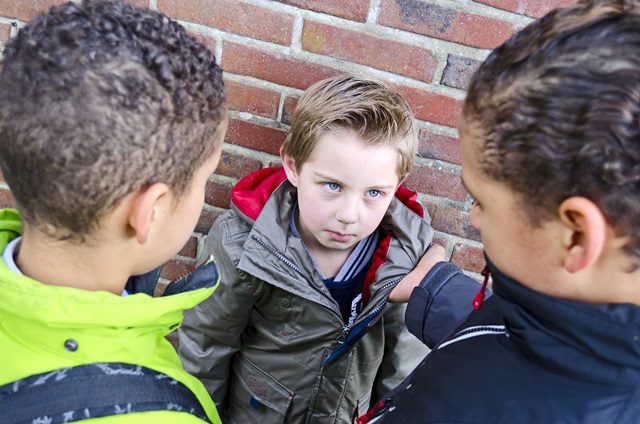 One every four Australian school students is affected by bullying, says recent research commissioned by the Federal Government.

According to Educational and Developmental Psychologist, Robyn Fallshaw, schools now have anti bullying policies that empower children and help them to overcome playground politics.

“Sadly, the news is full of stories about extreme cases of bullying in schools and workplaces, so schools are teaching kids to speak up when they know that things are not right.”

What do bullies do?

Ms Fallshaw said that bullies deliberately set out to hurt, embarrass or feel superior to their victim.

“Bullying is about power,” she said.

“Most bullies target victims who are vulnerable in some way. A bully will rarely try to humiliate a popular peer who has a lot of support. Instead, they will pick on a smaller, younger or more isolated child who has less chance of fighting back.”

She said that bullied primary schoolers are usually singled out because of perceived differences from their peers.

“Kids who wear glasses, don’t like sports or are big for their age have traditionally been a target for bullying,” she said.

“However, these days children who are considered too pretty, too clever, have unusual foods for lunch or even an out of fashion pencil case can also find themselves caught in a bully’s sights.”

What kids should say to a bully

Sonja Walker, a teacher, said that children can learn to stand up for themselves.

“For some kids, it a matter of becoming confident enough to look their assailant in the eyes and giving as good as they get,” she said.

“Bullies usually pick on children who do not speak up in their own defence, so giving kids a small repertoire of appropriate replies is one way of helping them withstand a bully’s attempt to embarrass them.”

Sonja says that one of the best things that a child can say to their bully is ‘So?”

“If a child’s accuser tells that they are ugly, fat, stupid or worse, the question ‘so?’ is often a very unexpected and effective response.”

“Far from showing that your child is intimidated by their bully, they are actually challenging the bully to come up with something new to say. Often a bully can’t do that and child who shows a fearless response like this is quickly left alone.”

Sonja explained that accusations like ‘You’re dumb” can also be met with humorous retorts like “Good thing I am smarter than you.”

“Bullies find it hard to be menacing when the tables are turned and the audience they are trying to impress is laughing at them,” she said.

How to tell if your child is being bullied

Robyn Fallshaw advised that changes to a child’s behaviour at home can indicate that they are being bullied at school.

“Classic symptoms of bullying include a reluctance to go to school or an apparent absence of friends,” she said.

“Parents should be on the look out for a child’s unwillingness to talk about their school day, disturbed eating and sleeping patterns or a tendency to seek refuge in the school library instead of playing with other kids at recess and lunch time.”

Robyn and Sonja agreed that concerned parents should always consult their child’s teacher if they suspect that their child is being bullied.

Things you can do if your child is being bullied

Robyn Fallshaw said that there are many ways in which parents can help their child to build the emotional resilience needed to make bullies back off.

“Helping a bullied child to build peer relationships is very important,” she said.

“Parents who organise play dates, host sleepovers and arrange small outings with classmates, neighbours and other friends give a bullied child the chance to build a social support network.”

She also advised parents to befriend other parents at school.

“Opportunities to meet outside of school hours give kids the chance to get to know other children on a more equal level.”

“Every kid needs a playground ally in times of need, so when parents model positive social behaviours, they are teaching their children how to make and keep friends.”

“And having friends who will stand by you is one of the best weapons a bullied child can have in primary school playground.”

Need help for your bullied child?

If your child is being bullied, you don’t have to deal with it alone.

Kids First’s child psychologists have supported hundreds of children and families just like yours and we are here to help.

We provide friendly, professional…and most importantly, practical advice and strategies that could provide solutions to the bullying problems your child is facing.

Sometimes, just talking to someone who is not part of your child’s school is a great way to get clarity and ideas that can make things better.

Call us today on (02) 9938 5419 to find out how one of Kids First’s Child Psychologists can give you the support you need right now.