If the following scenario sounds familiar to you, you’re not alone.  Your four-year daughter has taken a favourite toy from her three-year old sister.  The little one begins to cry.  That seems to “egg on” the older one, who calls her sister a cry-baby.  The younger girl screams for your help.  What should you do? 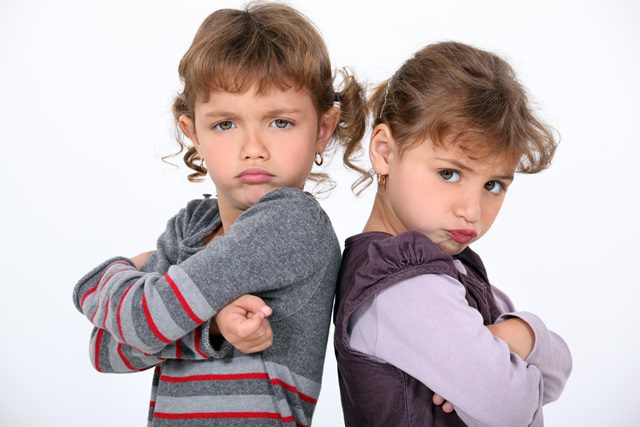 The first thing you need to do is remain calm.  The second is to stay neutral; and the third is to remind yourself that, as disappointing as this behaviour might be to you, it’s perfectly normal!

According to the American Academy of Pediatrics:

“All parents dream of a wonderful relationship between their children, but disagreements are unavoidable between siblings. Children are likely to fight over toys and tease one another. Despite a parent’s best efforts, sibling rivalry is a natural part of growing up.”

Sibling rivalry tends to be at its worst when both children are under the age of four, especially if your children are three or less years apart and share many of the same interests.  This is because very young children are deeply dependent on you for love and attention.  When a sibling also wants some of that love, it can represent a direct threat.  At this young age, children aren’t able to articulate their feelings, and have a hard time compromising.  The only way they can think of to solve the problem is to “take on” their sibling, usually by taking something that’s his, or by teasing them.

Although both children might appear to be coming from the same place when they fight, the younger and the older child are actually experiencing very different feelings.  The older child, for example, feels that his status in the family is based on his greater level of skill development—in other words, he can do things his younger sibling can’t.  As the younger child ages and begins to demonstrate his own capabilities, the older child tends to feel threatened.  That makes him (or her) become competitive and want to demean the younger sibling’s abilities—essentially, he’s saying, “I’m still better than you.”

For the younger child, the problem is that his older brother or sister seems to have privileges he doesn’t—maybe he’s permitted to stay up later or have a greater degree of independence.  That makes the younger child jealous.  He assumes that, because his older sibling is allowed to do more things, the parents prefer that older child over him.

When older children feel threatened and become competitive, younger children tend to be genuinely surprised.  Because they feel their older sibling already has more than they do, they simply can’t understand why he or she is “piling on” by taking away toys or making demeaning remarks.  These duelling feelings of one child feeling threatened and the other feeling jealousy can become a vicious cycle.

What Should You Do?

Because sibling rivalry is a natural part of growing up, you shouldn’t expect that anything you do will completely eliminate it.  There are, however, proactive steps you can take to make sure it doesn’t spiral out of control.  Here are 5 things you can do to manage conflict between your children:

Rivalry between your children is normal, and not something that necessarily signals a deeper problem.  By remaining calm and following some common-sense rules like the ones presented here, you can “lower the temperature” and help your children resolve their conflicts peacefully.

Need help to solve Sibling Rivalry in your family?

Kids First’s psychologists have many years of experience helping children and families to overcome the conflict that they experience.

If you need help, the good news is that you can find expert support to meet your child’s unique needs at Kids First Children’s Services.  To learn more about our psychology and family counseling services, contact us today.